Over the past century, the number of landfills and dumps in the U.S. has increased drastically. The average American throws away 4.4 pounds of trash every day, which in a nation of nearly 324 million people, amounts to an estimated 728,000 tons of daily trash – enough to fill 63,000 garbage trucks.

American's generated 254 million tons of waste in 2013, but what's even more shocking is the amount of waste produced per person in each state. 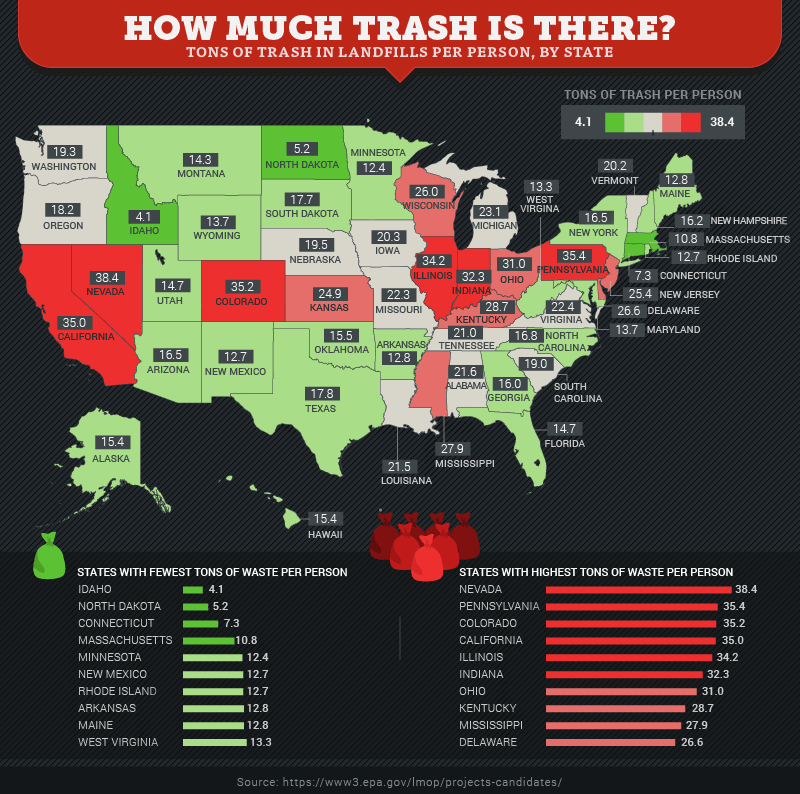 Nevada might take the top spot for states with the highest tons of waste per person (38.4 tons), followed closely by Pennsylvania (35.4 tons) and Colorado (35.2 tons), but it's California with 35 tons of waste that surprised us most. With a statewide ban on plastic bags and San Francisco's recent ban on styrofoam, it was unexpected to find California among the top five states of waste producers.

However, that's not to say that these state residents are necessarily producing all of this waste themselves. Many state landfills take garbage from other states as part of the $4 billion trash trade industry.

According to a report by SaveOnEnergy, Americans recycled an all-time high of 34.3% percent of garbage last year, up nearly 28 percent from 1960. But with an increase in recycling has come an increase in trash generation.

More than 60 million plastic water bottles are thrown away every single day in the U.S., ending up in our landfills, parks, and streets. These bottles can take over 1,000 years to biodegrade, so it's about time we take a note out of Idaho and North Dakota's book and recycle more.

On top of recycling, you can reduce your personal waste by using eco-friendly alternatives such as stainless steel bottles that are reusable and more environmentally friendly.