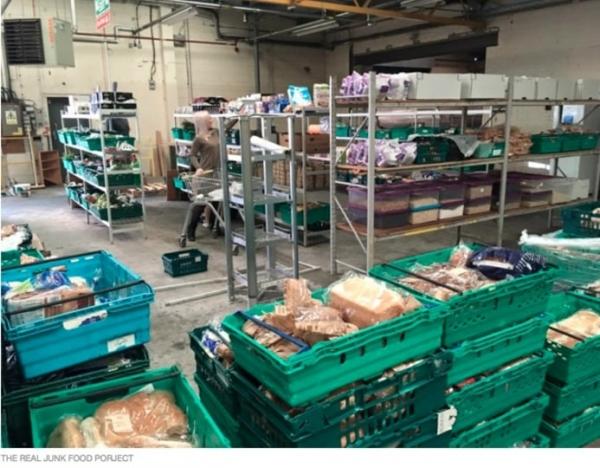 The folks over at The Real Junk Food Project have just taken their “we feed everyone” concept to a whole new level by opening the UK's first food waste supermarket.

The company started in 2013 with “pay-as-you-feel” cafés and waste-not food banks, which allowed patrons to give back either financial donations, their time, energy or skills as a way of accessing the food.

But now, TRJFP founder, Adam Smith, and his team have made leaps and bounds by opening "the warehouse" – the UK's first supermarket dedicated to reducing the 10 million tonnes of food and drink waste that ends up in landfills each year, 60 percent of which could have been avoided.

Not only is Smith's business model a green one, but the project also aims to help those who are financially struggling including families in need.

Like the project cafés, the supermarket located in Pudsey, near Leeds, allows customers to pay whatever they can afford for the food on offer, which would otherwise end up in landfills.

Smith says, "Let's REALLY feed the world," as he shares photos of the new supermarket space on the Grangefield Industrial Estate:

We love that Smith is pro reusable grocery bags as he reminds shoppers in his Facebook post to “bring a bag or two” – yet another win for the environment.

The food, which may otherwise have found its way to landfills, is used to feed a staggering 12,000 children a week, according to The Independent. Smith also told the UK publication that there that there are plans to open a warehouse selling surplus produce in every city in the UK.

With the UK topping the charts of EU food waste,  it's great to see a company such as The Real Junk Food Project out there making a difference and “feeding bellies, not bins.”