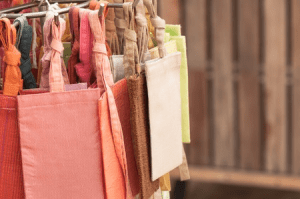 It has been more than six months since reusable bags came to be used in Los Angeles. LA welcomed the year with a plastic bag ban, which is still going quite strong. Since July 1, the existing plastic bag ban has expanded to smaller grocery stores as well as markets. To mark the success of the ban, LA Bureau of Sanitation handed out reusable bags to shoppers at close to 20 stores all over the city.

Ban Widens to Smaller Stores Who Have Personalized Recycled Bags

Until June, the ban was applicable only on large supermarkets, convenience stores and drugstores. It was pre-decided that smaller stores will be given extra time of six months to prepare for the ban. Now like the large supermarkets, even small grocers will not be allowed to hand out one-time use plastic bags to their consumers. Instead, they will have to offer reusable and recyclable bags, which will come with an extra cost of 10 cents. The stores will be allowed to retain the profit they make by offering the bags. However, the money can be used by them only to purchase more of such reusable bags.

The ban has some exceptions though. Plastic bags which are used for handing out pharmacy products, meat and fresh produce will still be allowed to be used. Apart from that even restaurants will be exempt from the ban. A fine of $100 will be levied on the businesses which do not comply by the new law. This amount will increase to $200 for the second penalty and go up to $500 for the third.

Now that the ban has left you with no option, but carrying a reusable bag while shopping, how about making your own reusable bag? Making personalized recycled bags is pretty simple and will practically be free of cost. All you need is an old shirt. Begin by cutting the sleeves as well as neck of an old t-shirt. Next, you need to turn the fabric inside out and sew its bottom part. Sewing the shirt will give you a box-like structure.

After that, take a pin and stick it two inches inside one of the corners. Do the same on the other corner. Again, sew the straight line from where you pinned the t-shirt and create a cross at the seams. Repeat it with the other corner. Just flip around the bag and you are ready to flaunt it !