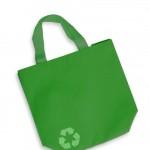 Groceries were generally packed in papers bags until the late 60s. When plastic bags began to be used extensively, a threat was posed to the environment due to the non degradable nature of plastic. Custom reusable totes bags have now made their appearance, combining convenience with concern to the environment.

The state wide ban on plastic bags issued in California has prompted many consumers to use reusable totes while shopping. It is however suggested that the bags be washed regularly to eliminate chances of bacterial growth.

Most of the plastic bags used in the United States are improperly disposed and hence land up in oceans and rivers. It's a threat to marine life when the creatures get entangled in or ingest the bags.

Volunteers from the Ocean Conservancy while cleaning the coastal lines along U.S.waterways, in 2010, picked up nearly a 100 thousand discarded plastic bags. Cities in the United States have already passed or are considering enforcing plastic bag bans.

Paper and plastic bags are charged in Washington, D.C, to encourage consumers to get their own reusable bags. A percent of the fee is taken by the retailers and the rest is used for cleaning the Anacostia River.

Senate Bill 590 in Pennsylvania has also issued a fee on plastic bags. A part of the amount is used up for the state's recycling processes.

Using reusable bags not only conserves land and marine resources but also reduces litter. American wholesale reusable bags are made out of woven polyester or cotton canvas.

Many countries have exercised plastic bans to curb the usage of plastic bags. Supporters of the plastic industry are unhappy with the turn of events and argue that plastic bans adversely affect the jobs of several people.

Plastic manufacturers are however in favor of recycling programs. Hilex Poly's Bag-2-Bag initiated in 2005 aims to cut down plastic waste by effectively recycling them.

As many American landfills are loaded with plastic waste that take years to degrade, many reduce- reuse- recycle programs have been introduced. Awareness is being spread amongst the residents about the harm that plastic has on the environment.

Environmental organizations urge people to change their mentality towards the environment and behave responsibly. Mass campaigns, legislation and incentives are some of the strategies adopted to popularize the use of eco-friendly products.