Greenpeace Striving For Zero Deforestation By 2020

Greenpeace Striving For Zero Deforestation By 2020 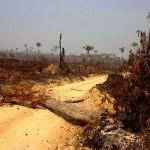 Areas that are of major concern to Greenpeace are eastern Africa and Brazil.  According to the World Resources Institute,  up to 90 percent of West Africa's coastal rain forests have been logged since 1900.  Brazil and Indonesia, which contain the world's two largest surviving regions of rain forest, are rapidly being stripped by logging, fires, and land-clearing for agriculture and cattle-grazing.

What Can Be Done by Greenpeace

Greenpeace also continues to work with governments around the globe to help them promote more green legislative programs like the Lacey Act, Roadless Rule and Forests For Climate.

Although logging in the United States has stabilized, it is still an important issue in other areas of the world.   Citizens can help support Greenpeace in their efforts to protect global forests by purchasing products made from 100% recycled materials.