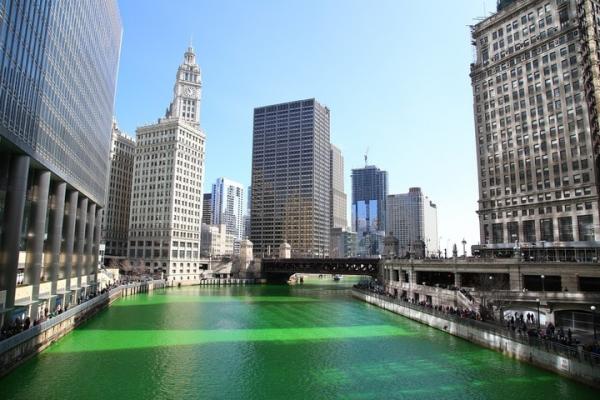 The Chicago River isn't the only thing that has been turned green in the city. Back in August of 2015, a partial ban on plastic bags went into effect in Chicago. Its restrictions affected major retailers that were still allowed to give out plastic bags, so long as they were tough enough to hold up to 125 uses. Restaurants and smaller stores were exempt from the ordinance.

However, one year after the plastic bag ban went into effect, the city's ban was rolled out to smaller chain stores like 7-Eleven. Though environmentalists criticized the ban claiming the law didn't really ban plastic bags, we have to give the city credit for at least trying.

The Chicago Tribune announced this month that roughly 5,000 households on the city's Northwest Side are receiving reusable blue bags as part of a recycling pilot program. Chicago has struggled to find an effective recycling strategy, so the city is hoping this $14,750 program will help change that and eliminate plastic bags in recycling carts.

The bags have been delivered to Dunning, Belmont Cragin, Austin, Albany Park and West Humboldt Park, according to Chicago Tribune. Each bag has a list of recyclable items on the outside and can be used to transport items to blue recycling bins.

"Providing simple educational material and a physical means from the kitchen to the cart is really what we're hoping to do," said Chris Sauve, deputy commissioner of Chicago's Streets and Sanitation Department.

Recycling might seem like a simple enough process, but even those who think they are fully educated on the system might be surprised to hear that the city made a policy to not take recyclables placed inside plastic bags due to the difficulty of determining whether or not the items inside were clean recyclables.  In addition, the plastic bags can get caught in machines at sorting centers. Surprisingly, pizza boxes are also off the recycling list which Chicago's deep dish pizza fans won't be excited to hear.

“Chicago has struggled to get its residents to recycle for years,” so we're excited to see the results from this pilot program come January.