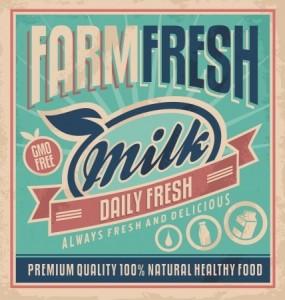 Recent studies prove that organic milk is good for the heart as it contains a better ratio of fatty acids like omega-3 and omega-6. Till now, it was believed that organic milk had better nutritional value; however, you now have one more good reason to reach out for the bottle of milk marked ‘organic'. The study conducted for over 18 months and published by PLOS One proves that organic milk has a ratio of 2.3 when compared to that of regular milk that has over 5.8 of these fatty acids that are not very good for the heart when consumed in large amount.

Washington State University research associate, Donald R Davis authored this study that was nationwide, in which over 400 samples of organic and conventional milk were tested. The results revealed the startling truth about the goodness of organic milk when compared to the conventional one that is consumed by most people presently. Davis goes on to explain that milk or no milk, there is too much of omega-6 present in the typical diet of today's Americans, which can be directly held responsible for the increase in the risk of cardiovascular disease, and cancer, in addition to autoimmune disease and the threat of excessive inflammation.

Though the ideal ratio of omega-6 to omega-3 is in the range of 2.3 to 1, it is alarming to note that the ratio that is actually present is between 10 to 1 and 15 to 1, thus increasing the risk of heart-related ailments. According to Davis, this is because of lack of awareness about how devastating a role omega-6 fatty acids play in our health. The popular misconception between the 50s and 70s was that omega-6 fatty acids are heart-healthy and was widely popularized.

However, it takes just more than cholesterol levels for your heart to be affected badly. While decreasing cholesterol levels, omega-6 acids increase the risk of heart disease due to the effects on various other mechanisms. Hence, now is the right time to turn to organic milk, not that there are no other sources of food, like vegetable oils, from where you receive copious quantities of omega-6 fatty acids. Turning to organic milk is one major step in stemming heart-related ailments.

The whole world is clamoring on the urgent need to go organic to prevent toxic substances from being imbibed in our everyday diet. By turning to organic food ingredients, we take a major health-conscious step that goes a long way in maintaining a healthy lifestyle. Once we realize the importance of eco-friendly promotional items,we know that half the battle is conquered. These items can not just help businesses but also the environment.