Meet the 7-Year-Old Who Started His Own Recycling Company

Meet the 7-Year-Old Who Started His Own Recycling Company 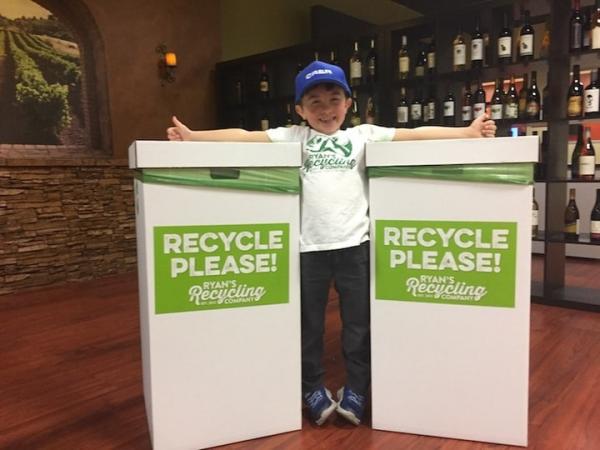 If you've been searching for inspiration to become more environmentally friendly, you may have just found it. Ryan Hickman, a 7-year-old from San Juan Capistrano, Calif., recently started his own recycling company and is perhaps one of the youngest entrepreneurs in the industry.

Ryan's environmental journey began a few years ago at the age of 3 (yes, you heard me right) when he visited a local recycling center with his father. The very next day, he told his parents that he wanted to give his neighbors reusable bags so they could recycle, too. It was at this moment in 2012, that his passion for recycling was ignited and Ryan's Recycling Company was born.

Today, Ryan and his family, collect plastic and glass beverage bottles as well as aluminum cans and take them in by the truckload every few weeks to their local recycling center where they are sorted and weighed. To date, Ryan's Recycling Company has prevented over 200,000 bottles and cans from ending up in local landfills.

If you live in Orange County, Calif., you can contact him to schedule a pickup time. Obviously, the mini environmentalist can't drive yet but his friends and family are there to help him out. If you don't live in the area, take a note of out Ryan's book and consider starting your own recycling company or program. As long as you recycle, you'll be doing your part to help protect wildlife and the environment.

Ryan Talks About His Recycling Company with Ellen

Over the last few months, Ryan's recycling story has gone viral and has been featured on hundreds of sites and radio stations. But perhaps his top story to date was when he was asked to appear on the Ellen DeGeneres show.

Ellen asked Ryan why he loves recycling so much. Ryan said, "Because it saves the planet and it keeps bottles and cans out of the ocean for animals to not get sick or die."

Shutterfly, a sponsor of the show, loved Ryan's story so much, the company donated 10,000 to his recycling company. Ryan has already accomplished so much in his journey to save the planet; we can't wait to see where his story will take him next.