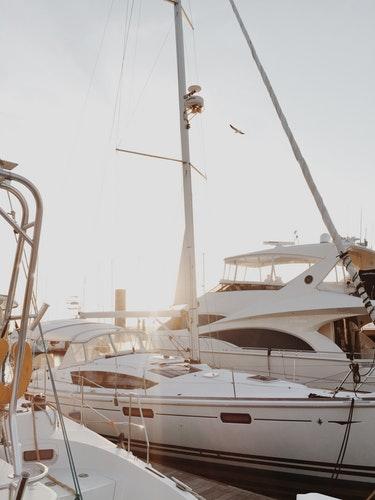 This year, environmental topics have been some of the biggest hot button issues. Everything became important, from ocean pollution, to single-use plastic, to coral bleaching, to climate change, and headlines were made across the globe. According to Boat International, a publishing company based in Wimbledon, Longon, specializing in yachting and the yachting lifestyle, these are the conservation pioneers, forward-thinking designers, and most active eco-activists working to help solve these crises in 2018.

Victorien Erussard & Jérôme Delafosse: An Original and Honest Endeavor That Inspires by Example

The world's first hydrogen-powered boat set off on a six-year worldwide voyage from France. It's mission? To inspire and educate the world about renewable energy.

Leading the trip are captain Victorien Erussard and film-maker Jérôme Delafosse. Their goal is to make 101 ports of call in 50 different countries. They plan to meet those working in sustainability. Hopefully this will also spark enthusiasm in others.

Their boat, Energy Observer, originally launched in 1983 as a sailing catamaran before being converted into a motor yacht, works by producing carbon-free hydrogen from seawater. Solar panels and wind turbines charge batteries, and a fuel cell converts the stored hydrogen into backup electricity.

This provides a very fancy example of the project's theory—coupling a variety of renewable energies along with hydrogen is the future of energy.

(Take note of all the people you meet with eco-friendly notebooks and pens.)

"Energies wand storage systems compliment one another, and we have to learn how to make them work together: there isn't a unique solution to climate change, but rather plenty of possibilities."

For Danish yacht owner and force of nature Frederikke Magnussen, an early love of the ocean was formed by a childhood spent sailing off the coast of her native Denmark. Her passion followed her into adulthood. It was then that she decided to do something about the harm being done to the waters.

In 2017, she and entrepreneur Sian Sutherland founded A Plastic Planet. The charity has one goal: to rid the world of single-use plastics. This is more possible than it seems. A plastic-free supermarket aisle was opened in Amsterdam, created the first plastic-free consumer trust mark, launched the first plastic-free day, and completed 55 media interviews in only 24 hours. All of these accomplishments happened this year.

(You can reduce the single-use plastic in your life with reusable bags and bottles.)

This leading venture capitalist's product is better known than his name.

As one of the founders of Skype, there is no surprise that Niklas Zennström is on the cutting edge of his passion—sailing.

The Swedish billionaire first appeared on the water in 2007, quickly moving up to a much larger ship class. He started his own racing team, Rán Racing, in 2008. The world regatta wins piled up.

This year, he is making waves for the launch of his latest sailboat, the Rán VII, and the electric propulsion inside.

The lithium-ion battery is optimised for sailing like never before. Weight is reduced while speed and range are dialed up to hit safety regulations.

"In technology you are dealing with risk and need to decide which are the areas where you want to be ahead of the curve and take more risks."