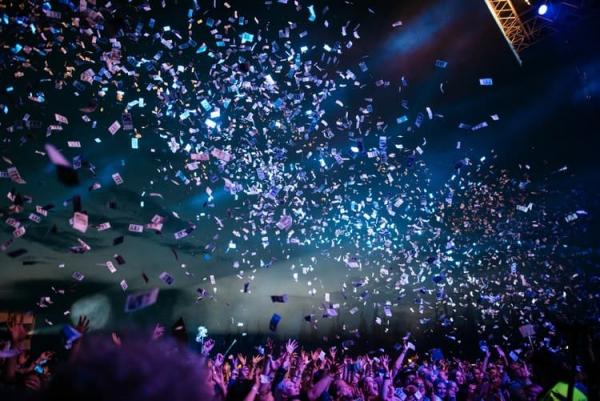 Chris Johnson's first outdoor parties with friends were small, impromptu, chaotic—"really good fun," as he puts it. Seventeen years later, Johnson and those same four college friends are still pioneers in the art of partying. Shambala, however, is now a four-day event in rural Northamptonshire that averages an attendance of 15,000. It has set an industry standard for its eco-credentials.

"We're a purpose-led organization, the point of it existing is to contribute something to the world, and the environment is an important part of our outlook; we have a responsibility—but also an opportunity to experiment."

The festival now uses 100 percent renewable power. It comes from a mix of vegetable oil and solar power units. They have also gotten rid of disposable plastics, and in 2015, they became completely meat and fish free.

"It caused a storm initially, but the appetite is there. This year we've got 1 percent of our audience coming by bike and 25 by coach. It might not seem much, but 80 percent of the carbon footprint of a camping festival is made by travel down to the site."

The cultural conversation concerning festivals in recent years has been about the low numbers of female artists or "making them less white." This year the topic has changed and the question is now: How can festivals go green?

The first thing is the war on plastic has multiplied. Glastonbury has banned the sale of single-use plastic bottles. Co-Organizer Emily Eavis estimates that this will "save the million bottles that we would have otherwise sold" and is in line with the festival's vision to tread lightly on the land. Instead, the 200,000-strong audience will have access to 850 water taps and dozens of water kiosks.
Save yourself from using single-use plastic water bottles by getting a reusable one.

Earlier this year, more than 60 major festivals, including Reading, Leeds, and Download, pledged to become plastic-free by 2021. The major offenders remain the same: straws, cutlery, and bottles. Bans have been met with enthusiasm by audiences. However, according to A Greener Festival Co-Organizer, Claire O'Neill, the not-for-profit which audits and advises the industry on how to reduce its environmental impact, the key impact remains these three: transport, tents, and toilets.

Using public transportation or signing up for ride sharing to get festival-goers to the site makes the biggest difference when it comes to the carbon footprint.

Getting people to remember to pack up and take their tents home is also a major environmental headache.

"We actively ask people to consider what they bring to the festival and urge them not to bring disposable tents. We don't ban it because we don't want to become financially prohibitive, but they are a bane for most festivals. The waste is extraordinary."

Consider how you take your stuff to the festival. Purchase a reusable, sustainable backpack, drawstring, or messenger bag.

Green Man Festival works with refugee charities to repurpose tents that get left behind, but emphasizes that many of them are not recyclable and instead, they get sent to incinerators.

"We're using compostable toilets across the site this year."

He goes on to explain the benefits of portable chemical toilets.

"Being sustainable and ethical is a core social responsibility for us—a lot of what we do isn't legislation, but it probably should be."

Melvin Benn, Festival Republic boss, efficient use of the diesel-powered generators used on site is a key concern. Converting to vegetable waste oil, biofuel, and hybrid units makes both environmental and economic sense to him.

"I've worked with De Montfort University and a group called Powerful Thinking to seriously look at and measure the power drain from each generator."

A Greener Festival monitoring shows that the average efficiency for generators is between 10 and 20 percent at the 7,000 outdoor events hosted in the UK each year. The ideal range is between 50 and 70 percent. Benn has hopes that his festivals will be the first to hit that range.

At science and music festival, BlueDot, held at the Jodrell Bank Observatory, the line-up is stuffed with climate crisis panels and talks held by experts and activists. According to director, Ben Robinson, the emphasis is on more than what happens at the festival. There is also an emphasis on what the audience takes home with them.

"Of course, building mini-cities in fields every summer has an environmental impact. But, festivals can prompt long-term behavioral change. It's not just about hedonism. People are open to new ideas and it invites them into a different conversation. We cause a conscious cultural shift—using less plastic, reducing waste, living sustainably. If these can be achieved on site, they can make a difference long after people have gone home."