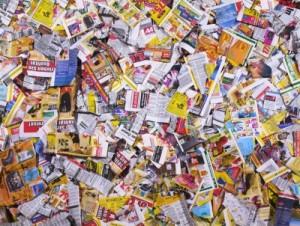 Burlington County is taking the initiative to try and expand its paper recycling unit. The officials in the county have placed additional recycling carts around its premises. The county initiated this paper recycling program in the year 2008, and since its inception it has saved the taxpayer's dollars. Currently, the county is expanding the program to ensure that more and more families have access to recycling carts.

According to Charlene Webster, the spokeswoman for the county, this program aims at setting up carts in 32 towns within the county. These include Maple Shade, Willingboro, Mount Laurel, New Hanover, and Beverly. According to Joseph Donnelly, a Freeholder, these carts will make the paper and cardboard recycling process easier, and through this system, the recycling rates will shoot up to 100 pounds for every household. In addition, the recycled paper that will be manufactured through this process will be used to make eco friendly promotional items.

The Impact of the Program in Burlington County

Many residents of Burlington County have appreciated the installation of these carts in their locality. In their opinion, these carts make the recycling process easier and more comfortable. The officials state that since the installation of these carts in the cities, the recycling rates have shot up by 20 percent. They also state that households which have access to these recycling carts recycle more than other households. Additionally, these carts are also helping the municipal communities by reducing the garbage that they need to dispose of in the landfills.