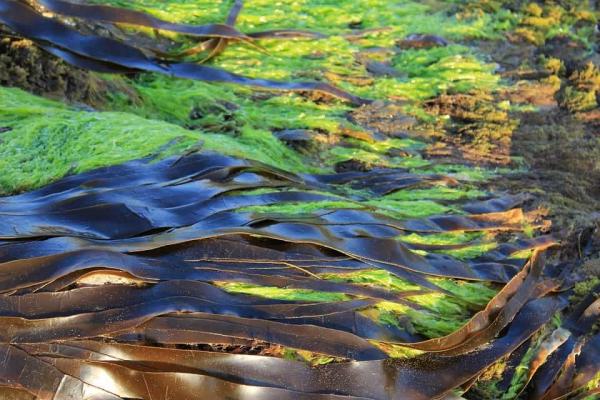 Seaweed--whether you think it's the grossest thing in the ocean or a delicious addition to your favorite sushi, three women are farming it out in California.

Even though California already serves up a third of the nation's vegetables, and two thirds of the fruits and nuts that we eat each year, excitement continues to grow. The state's potential for aquaculture has entrepreneurs looking to put California seaweed on the international foodie map. It's hard to imagine the famed coastline still holding a "best-kept secret", but Tessa Emmer, Catherine O'Hare, and Avery Resor are the braintrust behind Salt Point Seaweed.

This Bay Area company launched last June and has been harvesting wild seaweed off the Mendocino County, just north of San Francisco, coast for almost a year. The women behind the project then sell this seaweed to local chefs, community-supported seafood sellers, and retail locations. Their latest goal? To become the West Coast's first active, open-water seaweed farming operation.

The idea came to these women after living in East Africa and witnessing seaweed's increasing role in their cuisine. As local fish populations dwindled, resourceful women used seaweed as a replacement. It easily grows rapidly without the requirement of external inputs. Emor and Resor, who both have backgrounds in natural resource management, drew inspiration from a female run aquafarm in Zanzibar.

"There were so many women farmers using it as an alternative revenue model in declining fisheries environments. We started wondering why it wasn't happening in California." questions Emmer.

O'Hare got involved with seaweed farming as a hobby after moving to the Bay Area. Immediately, she saw the culinary potential for Northern California's innovative, health-centric food scene. "There's so much interest in local food in the Bay Area, but no one is taking advantage of the wealth of local seaweed we have right here."

Seaweed can offer more than just an interesting addition to your favorite dish. It could also be a major asset in the fight against climate change, ocean acidification, and the decimation of aquatic ecosystems (due to unsustainable fishing and farming). The plant readily absorbs excess phosphorus, nitrogen, and carbon dioxide from the water, deacidifying it and making it safe for marine species such as shellfish. Seaweed has also shown promise as a fossil fuel substitute. (It is also protein-rich and contains more than 25 vitamins and 50 minerals!)

It's the three-tiered benefit that leads O'Hare to call seaweed a "win win win."

"It's a great global solution to ocean acidification, unsustainable food systems, and climate change. We thought if we could figure out how to do it, we could help people all over the world do the same."

Though it has seen a rise in popularity, more than 90 percent of the seaweed we eat comes from Asia. Similar species, however, grow in abundance right where these women have their farm. There are local strains of kombu, used primarily in miso soup, along with wakame, the main ingredient in seaweed salad.

The ladies have also partnered with Hog Island Oyster Farm in Tomales Bay, where seaweed will grow alongside shellfish on floating ropes. Efforts are being focused on the red seaweed used in the trendy "poke bowl."

Salt Point owes a debt of gratitude to "forefarmers" such as Bren Smith's 3D ocean farm, Thimble Island Oyster Company, in New York. The fruits of Smith's labor have landed on some of NYC's trendiest menus.

With no fertilizers, no pesticides, and no freshwater required, aquafarmers have reason to easily get excited. "The species we're growing will double in mass every two weeks." states O'Hare. Above all, despite the easy farming, the women of Salt Point insist that seaweed is delicious. "I don't think I initially loved the taste of every seaweed I put in my mouth. But once you start cooking with it, it gets addicting. It's insanely healthy, and you really feel those benefits." say Emmer. Resor agrees: "It's so easy to cook with in soups and salads, and it all has umami, which makes it extra tasty and satiating. We eat it in everything."