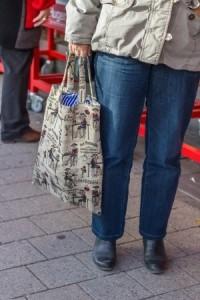 Residents of St. Croix County can no longer walk into retail outlets and department stores swinging their arms. Each time they set out shopping, they need to remember carrying reusable shopping bags with them. Thanks to the initiative of Buck Malick, District 6 Supervisor, none of the retailers in the city can hand out free plastic bags to customers. One saving grace though is that people have time until January 1, 2015, when the ban will come into force.

Reusable Shopping Bags After Ban on Plastic Bags from 2015

This gives some breathing space for retailers and grocers to use up whatever inventory they have, before turning away customers for want of bags to carry home the goods they bought. The proposal was put forward by Malick to the community development committee during a regular meeting on January 7. Malick said that it was high time something was done about the harmful effects plastic had on the environment, and the stringent measure had to be taken. Customers too, on their part have come to accept the importance of using reusable bags that they need to bring on their own.

Retailers may find it a bit too expensive to hand out free reusable bags as they are comparatively expensive than plastic ones. Grocers and shop owners can take the initiative themselves and enforce this voluntarily without driving away their customers. The residents too realize the gravity of the situation and will remember to carry their own reusable bags when they set out shopping. Even if they forget, retailers could very well hold some inventory of cheap reusable shopping bags that the customers can pay for.

With the committee having had preliminary rounds of discussions that showed a positive note during the last meeting, there should be no snag in the proposal going through to the Board of Supervisors' approval by April. Though there could be questions raised about why the proposal was not initiated at the state legislature instead of the municipal level, Malick believes that if the intentions are good, and the ideas productive, the county can take such initiatives forward.

Although people may have to put up with the discomfort initially, once they realize that putting end to the use of plastic makes a lot of sense, such trivial discomforts can be surmounted easily. When it is a question of the very survival of the planet in the long run, it is the bounden duty of every citizen to play some part to help protect the environment by saying no to the use of plastic.
Knowing that plastic is the least degradable of materials (it takes virtually hundreds of years to break down) it makes sense to switch over to cheap reusable shopping bags which will just add a few cents more to your budget.