Life After Climate Change: The Future Is Bright and Energy Efficient

Life After Climate Change: The Future Is Bright and Energy Efficient 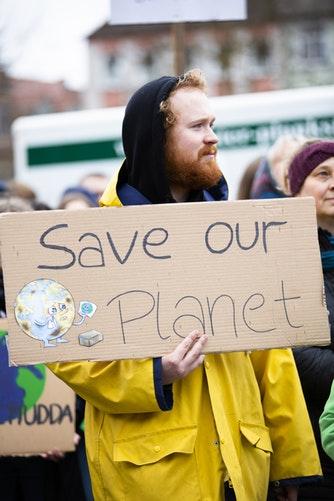 There are two equally compelling arguments for solving climate change. But, what will it actually be like? Better than today, or worse? Will we live in tents and farm some climate change created post apocalyptic nightmare, or will we have flying cars and live in a science fiction fan's dream?

Comfy homes, good food, whip-smart appliances, and robots whizzing around on farms all seem pretty likely. This is according to experts queried by USA TODAY. Overall, our living standards won't change much, they'll just become greener and more efficient.
Make sure you advertising is green and efficient by selecting Custom Earth Promos.

This is in stark contrast to the other side of the coin; a common complaint by critics who object to making global warming-based changes to the economy. They suggest that such changes will destroy America's standard of living. It will force us all to "live in yurts and eat tofu," as one of the commenters on this NPR excerpt put it.

These predictions presume that the shift to carbon-neutral energy, industrial, and transportation systems happens in enough time to slow, and eventually reverse, the effects of global warming that the planet is already experiencing These include rising oceans, more flooding, worse storms, and increasing heat waves and droughts.

Experts say that whatever happens next depends entirely upon how quickly we act. Many of the proposed technological and policy changes are already underway. However, they need to be sped up. Today, human pour 37 gigatons of carbon dioxide and other greenhouse gasses into the atmosphere...annually! People must avoid those carbon emissions within a relatively short amount of time—the next 20 years—to avoid "rapid, far-reaching, and unprecedented changes in all aspects of society," says the United Nations' Intergovernmental Panel on Climate Change.

Monday, April 22, was Earth Day. Let's assume that, for Earth Day, we have "solved" global warming and successfully switched to a carbon-neutral world. You, and/or your children, and/or your grandchildren, are waking up sometime between 2050 and 2100. What does this new world look like?

Houses themselves won't look much different, for example, although appropriate areas will most likely have solar panels installed. This will be especially important in hot, sunny parts of the U.S. as it will decrease the pressure on power production for cooling during the day. California has a law in place, currently, that will require any new house built after 2020 to have solar panels installed.

This shift is already slowly happening. Today's refrigerators are about 20 percent bigger, but they use one-quarter of the electricity those sold only 20 years ago did. The LED lightbulbs people now buy use 20 percent of the energy the incandescent bulbs of only a decade ago did, explains Jay Apt, a physicist, professor, and director of the Electricity Industry Center at Carnegie Mellon University in Pittsburgh, Pennsylvania.

When you get out of bed in the "new world," your house will probably still be a comfortable temperature. Properties will most likely still have a furnace or electric heat pump, but they won't be used as often. This is due to houses being insulated better. Heat trapping windows that keep cold in and out appropriately will be used.

The systems used to heat buildings will most likely be different to those of today. One example already being used involves pre-heating or chilling water when power is cheap and using it later, when power becomes more expensive.

"It's like radiators. In the ceiling of each floor you have a cold-water air heat exchanger. The cold water sits in a series of pipes, the air blows across it and becomes quite cold, and it blows in to cool the room."

Your next step might be to check your dishwasher for your favorite coffee cup. Along with most of your other appliances, it will most likely be tied to a smart system. This system knows what power costs at different times of the day. If your local power company is using wind turbines, the power may very well be the cheapest at night. If they are using solar panels, this may be during the day.
Fill your dishwasher with reusable water bottles. It saves money and cuts down on single-use plastic.

"Your dishwasher may very well communicate with the electric power grid and say, 'Ok, Mr. Smith has decided that he only wants to run his dishwasher only when the price of power is less than 12 cents per kilowatt-hour.' So, your dishwasher may decide to run at 2:00 in the morning."

Another change may be the increasing use of geothermal heat pumps. These take advantage of the fact that the ground is always about 50 degrees Fahrenheit (10 degrees Celsius) in the summer or winter. This means that if you run these pipes 6 to 8 feet below a building, you can cool or heat the liquid inside to about 50 degrees (10 degrees). That liquid can then be piped up to the building and used to bring the temperature inside to 50 (10) degrees.

If you drive across America, large solar arrays or wind turbine farms will be quite common; like seeing oil rigs in certain parts of the country are now. You may also see large arrays that recycle carbon dioxide by pulling it out of the air and turning it into fuel and raw materials for industrial use.

How will we do all of this driving? Electric cars.

Electricity is easy to generate from wind, solar, and other carbon-neutral sources. It's a shift already happening across the world. In Norway, 58 percent of all cars sold last month were electric, so says Norway's Road Traffic Information Council. That's a big step away from the 1 percent in the U.S. But, most experts predict this shift happening pretty rapidly. According to Chris Field, director of Stanford University's Woods Institute for the Environment, it won't happen forcefully.

"The electric car I have right now Is the best car I've ever had. It's a Chevy Bolt. It's very practical, well thought out, and fun to drive. It's a really great car."

The "miles per charge" will also go up. Today, electric cars average a range of 225 miles; many estimates put future cars at 400 by 2028. That's a difference of 175 miles. And, there will likely be fast charging outlets all across the nation, just as there are currently gas stations. Currently, new homes in Atlanta, Georgia, must be built to accommodate electric vehicles.

From Suburb to City

They'll still be populated mostly by apartment buildings and townhouses that are easily accessible on foot, with built-in bike paths. Excellent mass transit will be provided by electric busses and trains, and businesses will be interspersed rather than shoved into office parks miles away from town.

Those that do choose to live in the suburbs will either want to spread out or be attracted to the cheaper accommodations. These preferences will be more accessible and sustainable due to the increasing ability to not only commute by electric vehicle but also work from home.

Let's Get to Work

Work will likely have been more integrated into living areas. No matter where this is, the office will have been built to very high standards. This reduces waste, saves water, and conserves energy. Already, more than 33,000 buildings in the United States have been LEED certified, which means they are highly efficient.

Not everyone will even need to visit an office every day. Telecommuting will become more common as the tools for doing so become cheaper, better, and easier to use. More people may also work from communal spaces near their homes.

This is already seen in big U.S. companies. Companies such as Amazon, Apple, and Google have dozens of satellite campuses. Many young people are also used to working in shared spaces, such as WeWork or Impact Hub.

For nationwide travel, a network of high-speed electric trains might crisscross the country. This will make rapid travel easily accessible. San Francisco and Los Angeles will now only be three hours apart; New York and Chicago will only be five.

Planes will still be available, but they will be much more expensive than they already are. Unfortunately, electric planes are out of the question, as jet fuel has to be very energy dense. Instead, fuel will be produced from recycled carbon dioxide or industrial waste gases, or it will be biofuel made of organic waste from trash or leftover biomatter from agricultural fields.
While all paper is made from leftover biomatter, only seed paper sprouts again. Plant some wildflowers wherever you are.

This method is already being tested. Virgin Atlantic flew a Boeing 747 from Orlando, Florida, to London, England, using fuel made partly from captured greenhouse gas emissions.

…And on His Farm He Had a Robot

The national food supply will become fresher and more wholesome as growers and sellers become better at managing logistics. We'll also eat more seasonal foods. This will be because we'll be paying more for energy, which will get farmers thinking harder about not only energy usage but water usage as well.

"We've gotten into this mode that we expect to see blueberries and oranges every week of the year. As energy costs go higher and water becomes even in more short supply in the future, not every type of food will be available at every moment."

Professor of Agriculture at the University of Missouri in Columbia, Missouri, and Expert on Climate Change and Sustainable Agriculture Robert Myers

Author of the upcoming book The Fate of Food: What We'll Eat in a Bigger, Hotter, Smarter World Amanda Little says that while we'll probably be eating the same foods we already do, it will be produced differently and much more efficiently. This is especially true of meat, which she expects to become either plant-based faux meat or tissue grown in vats—identical on a cellular level.

"It's very inefficient to raise an entire animal just to eat the edible parts of it."

Author of the upcoming book The Fat of Food: What We'll Eat in a Bigger, Hotter, Smarter World Amanda Little

Farms will look the same from a distance, but an up close look will reveal a much different story. Older practices, such as planting cover crops in the winter, will still continue. They'll become more common to improve soil health. This will make land better able to withstand droughts and floods, and decrease the necessary amount of fertilizer. Complex crop rotation, aided by computer, will likely take place. It'll make farming cheaper and more efficient.

Growers may receive additional income by incorporating solar panels or wind turbines onto their land. Apt says this is already taking place. Many Midwesterners are receiving rents of $3,000 to $5,000 a year from wind turbines.

Fields may also have some robotic help in the form of drones or robots running down the rows that stop every so often to test the soil for moisture and nutrients, and take snapshots of the crops for weed and insect infestations. This information will go straight to the farmer, who can use it to better and more precisely care for their crops.

Ranchers and dairy farmers can use similar technology to manager their animals. By moving their animals from one space to another on an almost daily basis, they'll have mimicked what a buffalo herd would have done. This process, called intensive management grazing, results in healthier land, better forage for the animals, and lower costs.

A Better Planet for All

It's all doable with no breakthroughs required, says Diffenbaugh.

"The knowledge necessary for getting on that path is available."