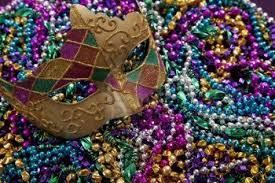 Today is Fat Tuesday, which marks the beginning of the Easter season.

Complete with its wild parties, outrageous parade floats, and boisterous band processions, Fat Tuesday is the biggest marks the biggest day of the Mardi Gras festivities for both locals and tourists alike in the city of New Orleans, Louisiana. Unfortunately, it also creates lasting environmental problems for the city.

In 2017, according to Reuters, 93,000 pounds (46 tons) of Mardi Gras beads were pulled from storm drains! This number doesn't include any beads that went straight to landfills. This also doesn't include any other part of the state—that's just New Orleans!

Fortunately, someone wants to change this: Baton Rouge-based Plant Cell Biologist and Louisiana State University Professor Naohiro Kato. He has developed a process that turns microscopic algae into the beads, which will biodegrade into soil after one or two years.
Write down all of your thoughts on biodegradable seed paper.

"I have family and friends who live in New Orleans and have been seeking to make the Mardi Gras celebration environmentally friendly. When I was invited to their Mardi Gras parade party, I met with a bunch of people who were concerned about the negative impact of Mardi Gras beads on the environment."

Kato made this discovery by chance.

"My student was supposed to come into the lab three nights in a row to move our test tube samples of algae from the centrifuge to the freezer, but one night he forgot."

When Kato examined the centrifuge, he found a mass of algae accumulating oils. This is one of the key ingredients in bioplastic productions.

After growing and harvesting the microalgae, a chemical is added to "stick tighter oils and other materials within the algae cells." They are then heated, molded, and dried before distribution can happen.

Unfortunately, the 2019 celebration will not see these beads. It will take time for commercial producers to have the means of production. Kato also admits that production cost is still high, which is a challenge. His plan to offset costs, however, is to produce the algae for nutraceutical companies for profit and use the leftovers for cost-effective eco-friendly beads.

But how do you turn Mardi Gras into Mardi Green this year? One suggestion, given by Kato, is to recycle your beads. Nonprofit ArcGNO has recycling bins around New Orleans where you can dump your used beads when you become tired of wearing them. This, in turn, helps create jobs in the community for individuals with Autism or Down syndrome.
Does this year's parade forecast for rain? Grab an umbrella made out of recycled materials.

Kato also believes attitudes towards the beads could change if they were made out of more precious materials, such as glass. This would lead people to want to keep them, rather than toss them.

"We can rethink the purpose of beads at Mardi Gras completely. Do we need to through such a large amount of beads?"

This attitude has already overtaken Lafayette, a city two-and-a-half hours west of New Orleans. Krewe de Canailles, the city's newest walking parade, requires all floats to be man-powered and all throws to be eco-friendly. They want the items to be treasured rather than tossed.

Throwing and receiving beads is a natural part of the celebration, but the garbage created by it doesn't have to be. If we want to celebrate more Fat Tuesdays, it can't be. Fortunately, by exploring biodegradable materials, we could eliminate the environmental impact from the most popular Mardi Gras celebration in the country.