Thirteen of the Best Spooky Spaces: Airbnbs Where Ghosts Are Guests

Thirteen of the Best Spooky Spaces: Airbnbs Where Ghosts Are Guests 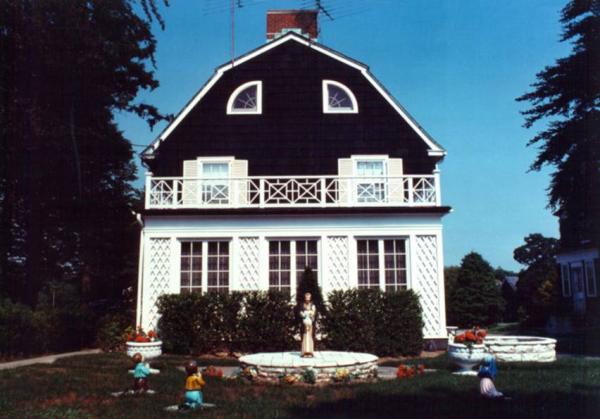 Airbnb is the best way to immerse yourself in local culture when traveling. It's also more sustainable than a hotel, using less electricity, water, producing less waste, and having lower greenhouse gas emissions than the large buildings that are hotels.

Do you love being scared? Are you a big fan of ghosts? Do you believe in the paranormal?

This week, in our series of Halloween posts, Custom Earth Promos is here to tell you about the thirteen scariest haunted houses, spooky spaces, and apartments with ghost guests that are available for rent on Airbnb.

For those feeling particularly brave and ready for sleep-time specters:

This posh pad exists in one of the spookiest cities in the entire nation: New Orleans, Louisiana. Among the three rooms available, "The Haunted Bedroom" is available for rent. The ghost of a young girl in a yellow dress from the 1890s is said to inhabit the room. For those curious but easily frightened, not to worry; according to the Airbnb listing--she's quite shy.

When you're finished keeping a lookout for the terminated tyke, head down to the mansion's pool. You can also ask the homeowners, who reside in the mansion as well, for some "tales of New Orleans lore."

During the 1920s, this brothel, located just above the historic Tonopah Liquor Company in Tonopah, Nevada, was active and thriving in what was once Tonopah's red light district.

While no longer a brothel, guests will find themselves surrounded by saucy nude portraits, rooms named after historic sex workers, and you may just meet some ghostly gals (according to Time Out).

This Victorian Inn located in the heart of the historic Dixfield Village in Maine is also known as the Marsh-Edwards house. It is rumored to have numerous "spirited guests." This rumor has been confirmed by paranormal experts hired by the inn's owners.

Some of the spooky guests include a young boy who has been spotted on the first floor. The ghost of a woman walks around outside. You may also find a "big man" in the hallway. Music can be heard at all hours in this 137 year old inn.

Built in 1890, this three-story brick house is rumored to be haunted. Though, the suite's hosts provide limited insight into the home's eerie nature, many guests have filled in details in reviews of this Missouri manor. One guest to the Benton Park residence even mentioned a missing belonging turning up in an odd location. (Ghosts do enjoy playing with your stuff; keep it safe in a drawstring, messenger, or regular backpack.) Other guests have reported hearing a woman's voice in the dead of night.

This suite can be booked for $60 a night.

This unassuming house in Bisbee, Arizona, looks like any other Airbnb, but beware! It harbors a secret haunting.

According to its description, it's "genuinely" haunted and strange bouts of "unexplained mischief" are to be expected. Otherwise, guests can enjoy eco-friendly, organic accommodations.

This house is listed for $50 a night.

6. The Haunted Bedroom at Talliston

As soon as you step into this spooky space, you are transported back to the early 1900s. This international location--Great Dunmow, United Kingdom--is meant to replicate the bedroom of a "seven-year-old Edwardian child complete with books, toys and ephemera."

It's rumored that a child used to live in this room. He complained of lots of sounds and noises come evenings. After he died, the parents sealed it up in fear of haunting it. The room was reopened by the house's current owner, who renovated it as they imagine the original child may have kept it.

Renting a haunted child's bedroom becomes worth it when you have access to the whole house, something other renters don't.

Sleep in this spooky space for $164 a night.

Once voted the most mysterious house in Saint Paul, Minnesota, it's gothic architecture and and castle-like appearance make it easy to see why.

There haven't been any reported ghost-sightings, but its spooky vibes make it the perfect place to gather for a scary movie marathon or seance. That's what earns it a place on this list.

Storm the castle for only $72 a night.

Stay in the heart of Savannah, Georgia. Built in 1799, this cottage gains fame not only for being possessed but also for appearing in Robert Redford's The Conspirator, a historical drama about President Abraham Lincoln's murder trial, and the one female co-conspirator and first female to be executed by the United States federal government.

The guest house is rumored to be occupied by a woman named Laura, who reportedly lived there for 50 years. Encounters, however, have said to be friendly.

The "madness chamber" located in York, England--another pad across the pond--is reportedly over 600 years old according to its Airbnb description.

It's known for being somewhat of a time capsule of York. Oh, and, for being soundproof. If you scream, nobody else will hear it. In these times, that may just be a good thing.

This building itself isn't a haunted house. It is located smack dab in the middle of a ghost town in Terlingua, Texas.

If the thought of being isolated doesn't creep you out, come for the beauty, take in the stars, and embrace the simplicity that is Texas terrain.

Book this spooky space for $130 a night.

The David Stewart Farm lives in the midst of historic Gettysburg, Pennsylvania. The farm has existed since before the Civil War and was even used as a hospital following the battle of Gettysburg.

While guests have access to the entire house, they won't necessarily be alone in it. According to the Airbnb host, who has lived here for the last 36 years, There are many ghostly guests. But don't worry--they're all friendly.

Come join the otherworldly occupants for $105 a night.

Located in Vidnoye, Russia, when you rent the entire Chateau Pitau castle, you get access to a pool, a disco, a sauna--and a ghost! The owner reportedly sees one once a week as the clock strikes midnight.

When there are so many other amenities, there are plenty of places to hide from paranormal punctuality.

You can book this creepy castle for $200 a night.

Out of all of the Airbnbs on this list, this one is the most haunted. The small apartment, also located in New Orleans, lays claim to "loads of active spirits." If you're a ghost lover, this is definitely the rental for you!

According to the listing, you'll definitely be sharing the space. Regular paranormal investigations are scheduled from nine at night until midnight; you're welcome to join some of the investigations with the crew of nightly researchers.

Stay at this "dead and breakfast" for only $50 a night.