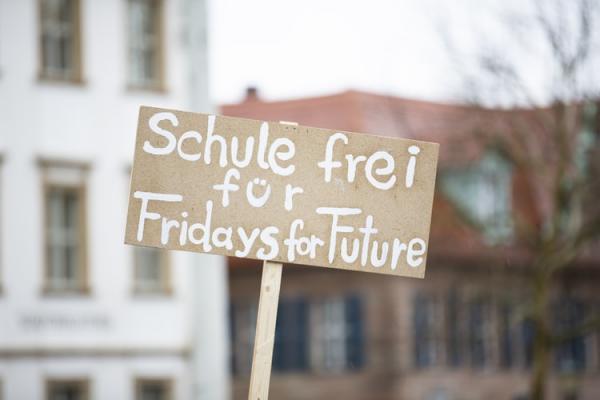 GQ just held their annual Men of the Year awards. With winners such as Hugo Boss' Most Stylish going to Scottish actor Richard Madden and Actor of the Year handed out to Taron Egerton for his portrayal of Elton John in Rocketman, they did not discriminate when it came to gender. Climate activist Greta Thunberg took home the win for Game Changer of the Year.

The story of 16-year-old Greta Thunberg has been told time and time again. But, rarely, has it been told well.

Thunberg is the Swedish student who sparked the global school strike for climate change movement in August of last year. It was participated in by about 1.6 million people in 133 countries!

Thunberg has also graced the cover of Time magazine, met President Obama, and has been nominated for the Nobel Peace Prize. She has given speeches at the UN; Davos, Switzerland; and the British Parliament.

Thunberg has become a symbol for a generation being ignored by a generation that won't have to suffer the consequences of not listening. In her speeches, she'll often state that we have 10 years to delay a chain reaction that will forever alter the future of our planet.

You can find all of this information online. The question is: Which version of what you'll find is the correct one?

The cynical version claims that her parents pushed her into this, writing her speeches, which have been collected into a book titled No One Is Too Small to Make a Difference that's available from Penguin, and parading their daughter around to promote their cause. The optimistic version is quite the opposite. This version claims that her mother gave up her opera career for her daughter by agreeing to never fly again. She did this not for the planet but her daughter—who was depressed, not eating, not talking, and this cause became her path to recovery.

The truth, as is often found, lies somewhere in the middle.

Thunberg often sees her Asperger's as a superpower rather than a disability. She claims she sees the world more clearly and can't understand why humanity is ignoring what should be daily front-page news.

"I have Asperger's syndrome and, to me, almost everything is black or white. I think in many ways that we autistic are the normal ones and the rest of the people are pretty strange. They keep saying that climate change is an existential threat and the most important issue of all. And yet they just carry on like before."

Climate Activist and GQ Game Changer of the Year Greta Thunberg at Parliament Square in London, England, on October 31, 2018

This explains the school strike for climate, refusing to fly, and a breakfast that was "about to go off."

Food is partly to blame for how this all began. Thunberg is a tiny girl, not even five feet tall, and much younger looking than she actually is. This is the result of a period of severe depression when she was 11 and the serious eating disorder that followed.

The family's memoir, Scenes from the Heart, details this trauma. Thunberg stopped eating in September of 2014, and so her parents began to document what she ate and how long it took. Time began to stretch out, with hospital appointments, tests, counseling sessions. Finally, after receiving antidepressants, the long road to recovery began.

By the time she returned to school, there was hope. Unfortunately, while Thunberg has always been a smart child, she has a photographic memory, can recite every world capital, name all of the elements despite having trouble with pronunciations, her peers proved to be a problem for her.

As is true for a lot of other autistics, she finds herself bullied relentlessly. Her peers can sense that she's different, and for kids, that seems to be reason enough. Her parents discover this when her father takes her to her school's Christmas party. Even with him standing at her side, her classmates openly point and laugh.

Over the Christmas break, Thunberg recounts stories of her bullying, but in an amused way, as if it happened to someone else or she had watched a movie. The school even blames her for it, claiming to her parents that other students have mentioned her strange behavior, how she speaks too quietly and never says hello.

Not long after this, however, a light appears at the end of the tunnel. Thunberg's condition has finally reached a point where she is physically healthy enough to undergo neuropsychiatric testing. This is when she is diagnosed with Asperger's, high-functioning autism, and obsessive-compulsive disorder. This provides relief for her mother, rather than worry.

In interviews, Thunberg mentions that her recovery from depression was aided by her focus on the climate. In the time she was not at school, she spoke to her parents about her worries, her fears, and it always came back to the environment.

"We started talking because we had nothing else to do. And it felt good to get that off my chest."

She would show her parents

"...pictures, graphs and films, articles and reports. After a while they started listening to what I actually said. That's when I kind of realized I could make a difference."

Thunberg told GQ that she writes all her own speeches but asks others for input. Her father tries to tone them down out of fear that she might say something bad, which she believes she's already doing.

Thunberg remembers addressing the secretary-general of the United Nations:

"...and I was saying, 'What's the point of going to school if we don't have a future? And he was so worried, as he hadn't seen my speech before. He was like, 'You can't say that to the secretary-general!' I did erase it and printed it without it. But then I remembered it during the speech and added it while I was speaking, so he couldn't say anything about it."

When addressing the World Economic Forum in Davos on January 25, Thunberg opened with, "Our house is on fire. I am here to say, 'Our house is on fire.'" She points out that we're less than 12 years away from the damage becoming irreversible. At the minimum, our CO2 emissions need to be immediately reduced by at least 50 percent! She ended with a plea for urgency:

Climate Activist and GQ Game Changer of the Year Greta Thunberg at the World Economic Forum on January 25, 2019.

Thunberg's school strike began on August 20, 2018. It followed a heatwave and wildfires in Sweden. She wouldn't go back until September 9, 2018, the time of the Swedish general elections. Since then, along with millions across the globe, every Friday has been a strike day. One of her demands is that Sweden aligns with the Paris Climate Agreement.

Thunberg has increasingly realized that this the way to spread the word. Before the month ends, another winner, GQ's Band of the Year, The 1975, will release a spoken-word track they made with her. It will be the opener on their new album.
Spread your business and make your word one of eco-friendliness with Custom Earth Promos.

Thunberg then tell's GQ that she's taking a gap year from school to focus on her activism. She plans to speak to the UN in New York, making the trip from the UK to the US on an eco-friendly racing yacht, a journey which she recently completed.

"I have promised myself that I'm going to do everything I can for as long as I can. And I think I can go back to school one year later. That doesn't really matter. But if we don't do anything right now...Right now is the time when the transformational change needs to begin. So if we don't start that right now, this coming year, then we have a smaller chance of succeeding and preventing the worst consequences of the climate change crisis. I just think there's no more time to wait."

For such a young woman, Thunberg has a clear grasp on the science behind climate change. She is never short of a fact when it's needed. When asked what the single most concerning fact is, she circles back to the planet's carbon budget.

"I don't know. I am neither an optimist nor a pessimist. I say I'm a realist, that if we do the changes required it is still possible within the laws of physics to avoid the worst. But if we don't then maybe not. But I just think that we will have to do everything in our power to make the changes required possible. To do your best is no longer good enough. We now have to do the seemingly impossible."