Earth Day 2017: NASA Puts the Earth Up for Adoption

Earth Day 2017: NASA Puts the Earth Up for Adoption 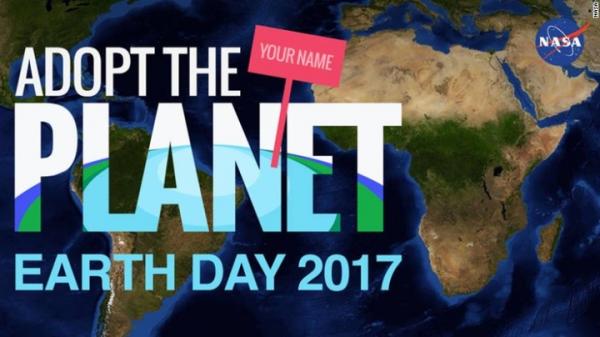 This year, Earth Day Network, the world's largest recruiter to the environmental movement, is focusing its campaign on environmental and climate literacy, the idea that "education is the foundation for progress."

According to Earthday.org, more than 1 billion people from around the globe now participate in Earth Day activities and festivities, making it the largest civic observance in the world.

In honor of Earth Day on April 22, NASA has launched a campaign which invites you to celebrate the holiday by virtually adopting a piece of Earth as seen from space.

The online adoption allows supporters to assign their name to one of the 64,000 available locations, essentially "adopting" a randomly selected piece of Earth. Once you've followed the simple adoption steps, you'll receive a personalized certificate for your unique numbered piece of Earth (on average 55 miles wide) featuring data from NASA's Earth-observing satellites. 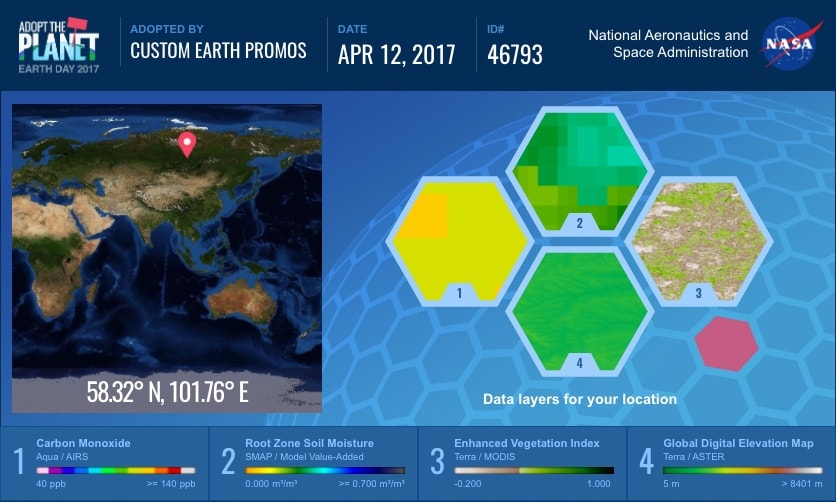 You can then go on to print and share it on social media and check out other locations using NASA's interactive map which will reveal even more Earth science data from their Worldview website.

In Worldview, you are able to view images of vegetation on land as well as air quality measurements and even see how far pollution and soot from fires or volcanoes have traveled from land to the ocean. You'll also be able to see how your piece of Earth has changed over time since the majority of the data spans almost 30 years.

In addition, NASA will be teaming up with Amazon Web Services to bring you live 4K Ultra HD video from space. The event will be available to the public on April 26.

Ultimately, NASA's goal is to have the entire planet adopted by Earth Day and once all of the pieces have been adopted, they plan to start all over again, so that everyone who wants to take part will be able to.

By adopting a piece of the Earth and sharing your activity, you'll be supporting Earth Day and helping to fulfill the network's mission to "diversify, educate and activate the environmental movement worldwide."