Organic Farming Establishing Itself in the U.S.

Organic Farming Establishing Itself in the U.S. 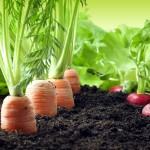 Although organic farming makes agricultural produce more expensive, this technique is gaining popularity as consumers are opting for chemical-free and pesticide-free foods. More farmers in the U.S. are now opting to get their products certified as organic.

Organic farming is beneficial not only to consumers buying organic products, but also to the farmers involved. Organic foods are free from synthetic chemical pesticides and fertilizers. Many synthetic chemicals are known to be carcinogens. Further, organic farming practices are healthy for the ecosystem. These practices introduce important nourishment to the soil and enable the soil to preserve water. This ability is very important in drought-prone areas that often face shortage of water.

Drought renders land unable to be cultivated. Organic farming practices can reduce this problem to a large extent. An added incentive for farmers to get certified as organic producers is the fact that they can sell their products at higher rates in the market. The heavy demand for organic foods ensures that farmers make a good profit, while at the same time reducing depletion of nutrients from their land soil.

Other Countries That Have Adapted Organic Farming to a Large Extent

The biggest market for organic products is in Europe and North America. However the maximum number of organic producers is from India and the Malvinas Islands. The greatest area of land under organic farming is in Australia. Most countries around the world have realized the importance of organic farming. These include India, China, Vietnam, Thailand, Malaysia, Germany, France, UK, Italy, US, Canada, Brazil, Argentina, Australia, New Zealand and many more. The growing number of such countries shows that organic products and eco friendly promotional items are being widely accepted by people far and wide.