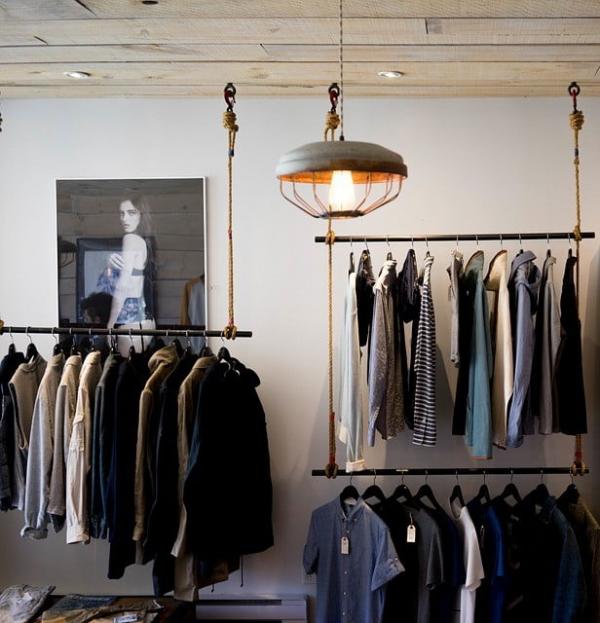 On September 10th, in Downtown Blaine, Washington, the owners of eco-friendly retailer Rawganique opened their first, and currently only, brick-and-mortar store in the United States.

After more than two decades on Denman Island, British Columbia (in Canada), the owners of this organic, vegan, unique clothing line purchased the former Subway restaurant, located at 429 Peace Portal Drive. It's set up like a showroom, showcasing organic, chemical-free clothing and household wares available both in-store and online. The shop also features a cafe that serves vegan food, coffee, pastries, and ice cream.

"What we're offering is a lifestyle store." claims co-founder Qeanu Wallner. Their products, he adds, impact "the way you eat, the way you are clothed, and the way you treat people."

Wallner started Rawganique with with business partner Quo Yong Fu while homesteading on Denman Island back in 1997. Choosing to live off of the land, the pair made their own bed sheets, socks, and towels. This was due to chemical sensitivities. Their blog they had about their experiences caught traction and eventually began to inspire others who wanted to live a chemical-free lifestyle. The popularity came as a surprise to Wallner.

Rawganique specializes in selling organic cotton, flax linen, and hemp products. These are manufactured in the United States, Canada, and Romania. Currently, the website features an estimated 1,200 products, including bedding, men's and women's clothing, kids' clothing, and footwear.

Wallner and Fu's goal is to reach both those who have chemical sensitivities and those who prefer to live without chemicals such as formaldehyde and dioxin. These chemicals are often used to reduce wrinkles and preserve materials.

We are real, passionate people creating handcrafted clothing and organic products on a small scale. We don't take "no" for an answer when it comes to making natural fiber wearables that are cruelty-free, hypoallergenic, ethical, and sustainable.

Up until 2015, the pair was still on Denman Island. They relocated to Point Roberts, Washington, but building restrictions led them to purchase not only their new retail store but also a warehouse last summer.

Blaine is refreshingly international in outlook. We definitely felt the eco-conscious vibes when we visited and have met so many like-minded people here that we feel right at home.

Hundreds of items are on display. These can be purchased in-store, or if certain sizes and/or quantities are not available, customers can purchase them from the website. Having the warehouse located down the street ensures quick delivery.

The on-location vegan cafe serves salads, soups, small-batch ice cream, and other dishes made with a mix of raw ingredients that includes quinoa, greens, and beans. Silvia Gore, formerly of Blaine's Seaside Bakery and Cafe, makes the pastries. Eventually Wallner and Fu hope to open the space to local artisans looking to learn traditional crafting and display their product(s). "They want to show that it's still possible for  anyone to learn a skill and make ropes, shoes, soap, paper and weave, sew, knit, and crochet using organic natural fibers and chemical free techniques," reads a press release from the city. "They hope to show that there's an alternative to importing unnatural, sweatshop products.

By relocating, the store has added six jobs to the area and expects to add at least five more. This includes general manager Christy Lonquist, former owner of the Pastime Bar and Eatery, which she owned with her husband Rodny. "I just like the concept of this store," she said. "The spirit of this company is so upbeat."

"We're seeing a renaissance of sorts in our downtown right now, and Rawganique is a key part of that," stated city manager Michael Jones. "Places are opening, expanding, and changing. Restaurant choices are important to visitors and our options keep expanding." Mayor Bonnie Onyon added "People need places to stop, learn and discover new things to have a reason to stay awhile and meet people. Retail does that and Rawganique will add an exciting lifestyle venue and point of interest for visitors and locals alike."

The official, grand opening will take place on Friday, September 28th at 2 pm.