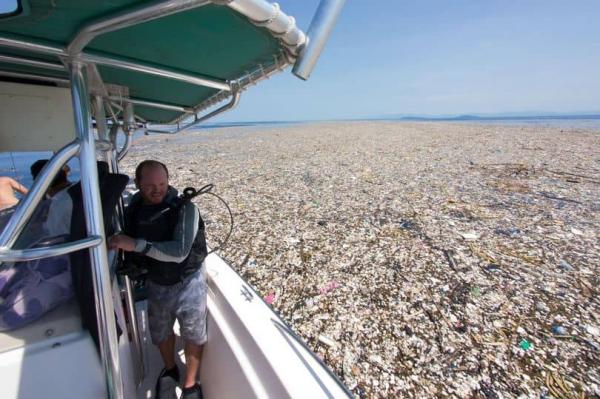 Do you still use plastic grocery bags instead of reusable ones? What about plastic water bottles? Ziplock bags? Plastic garbage bags? Do you put your fruit and vegetables in plastic produce bags at the grocery store? Do you buy toilet paper that's wrapped in plastic instead of paper?

If you answered yes to any of these questions then you're undoubtedly contributing to the plastic waste problem.

To show you the damage plastic waste has caused and is continuing to cause to our planet, Caroline Power, an underwater photographer, shared photos on Facebook of the shocking amount of plastic waste she found floating in the Caribbean – garbage that stretched for "nearly five miles," she told The Telegraph.

She described the blankets of plastic forks, bottles, and other waste as "devastating."

“To see something that I care so deeply for, being killed, slowly choked to death by human waste was devastating.”

The worst of the plastic waste her dive team found was roughly 15 miles off the coast of Roatan heading towards the Cayos Cochinos Marine Reserve. Though however shocking Power's photos and videos may be, plastic waste issues, especially pertaining to our oceans, is not a new phenomenon. Just last month, we recounted a story of another diver who saved a sea turtle from a single plastic bag. This month, we've seen the UN recognize this issue and commit to stop ocean plastic waste.

With a staggering 91 percent of plastic not being recycled, it's no wonder why scientists are predicting that by the mid-century, the oceans will contain more plastic than fish.

Ms Power shared these photos in hopes they would encourage others to "make changes to their habits and daily lives to help protect and conserve this planet."

It's no wonder why this video has gone viral! See for yourself.