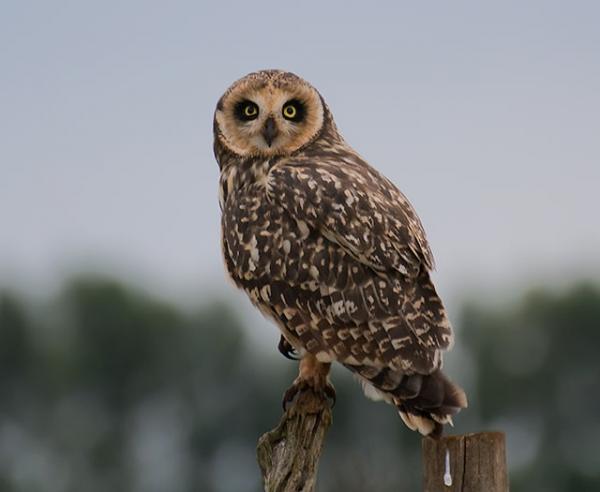 Region 8 Environmental Conservation Officers (ECOs) recently conducted a unique detail in Livingston County, New York. This was done in an effort to both protect an endangered owl species and assist local landowners concerned with traffic and public safety.

For years, Livingston County has been the winter feeding grounds for short-eared owls. They return from breeding in Canada to spend their winters in New York. The specific location was not identified, although the owls prefer large grassland fields.

Listed as an endangered species in the state of New York, the owls are easily photographed. They fly low to the ground when hunting rodents. This information comes from the state Department of Environmental Conservation (DEC) in its weekly news release about eco actions.
Make sure you are making proper eco actions by purchasing your promotional materials from Custom Earth Promos.

As word began to spread across social media, people began to show up in increasing numbers. According to DEC, they were parking on the side of the road and setting up tripods. This year, ECOs also received a complains that someone had launched a drone in an attempt to get video footage of the owls.

DEC said that the increased traffic has caused headaches for the local residents. In response, ECOs have spent time in the area speaking with numerous bird enthusiasts over the past few weeks. These enthusiasts are receiving lessons on the laws protecting threatened and endangered species. ECOs have also attempted to mediate the parking, traffic, and trespassing issues. DEC hopes that through this outreach, the owls will remain undisturbed and continue to spend their winters in the area.
Do rain, sleet, and snow have you discouraged? Take a recycled umbrella with you the next time you go bird watching.

Posts to the American Birding Association's website that compile bird observation reports have noted the appearance of short-eared owls on the local Nations Road and problems with people "parking badly, trespassing, and behaving like bird paparazzi."

Posts reminded birders that Nations Road is two lanes. It has residential traffic and must remain passable. They also noted that weekends have been the worst. One Saturday last month saw 16 cars along the road alone!

Purposely disturbing, flushing, or chasing a threatened or endangered species is considered harassment and is illegal, according to DEC officials.

Unlike most owl species, short-eared owls roost on the ground in tall grasses. They are most often observed in the late afternoon, or at dawn and dusk, foraging for mice and voles. The owls are easily disturbed, which can cause them to expend unnecessary energy flying or abandon their roost site.

The Genesee Valley Conservancy, who have worked to preserve the short-eared owl's habitat, has previously noted that the birds are plentiful along Nations Road in the cities of Geneseo and Avon. These are locations where large swaths of grassland fields provide the perfect habitat. Unfortunately, this habitat is threatened by residential development as the cities expand. The Conservancy said that this puts the owls at risk.
You can help protect these spaces by littering less with a reusable water bottle.

The Conservancy is working with landowners to prevent subdivisions and development within the Nations Road Grasslands. This is a special area designated by the National Audubon Society. It includes a dozen endangered grassland bird species, and many more listed as special concern or threatened. Over 30 projects in this region have protected 4,700 acres of private land. This provides a base for the short-eared owls to thrive.