These Maps Reveal What Americans Really Think About Climate Change

These Maps Reveal What Americans Really Think About Climate Change

When it comes to countries that contribute the highest amount of CO2 emissions, China takes the number one spot, closely followed by America.

Even though 79 percent of climate scientists agree that climate change is happening, public opinion across the U.S. has been hard to garner, until now.

Despite skepticism about climate issues, the Yale Climate Opinion Maps found that 70 percent of Americans believe global warming is indeed happening, however, only 53 percent agree humans are to blame.

If we take a closer state-by-state look, Hawaii, closely followed by New York, have an average of 78 and 77 percent, of people who accept that climate change is real. The darker the orange on the map, the more the state resonates with global warming. 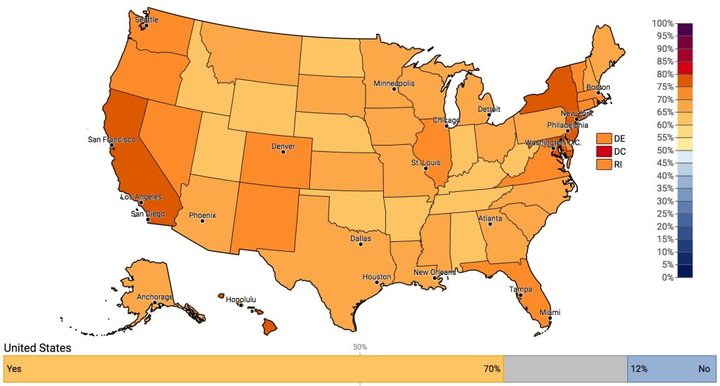 When it came to policy support, a whopping 82 percent of Americans were in favor of funding research into renewable energy sources, 75 percent supported the regulation of CO2 as a pollutant, and 68 percent backed the process of setting stricter CO2 limits on existing coal-fired power plants.

More surprisingly, 66 percent were in support of requirements for utilities to produce 20 percent electricity from wind, solar, or other renewable sources, even if it were to cost the average household an extra $100 a year.

The overwhelming support for funding and regulations is interesting considering that only 32 percent of respondents have discussed global warming with their friends and family, and roughly a quarter of people said they only heard about global warming in the media about once a week. This might explain why there was a severe lack of importance placed on climate change during the 2016 U.S. presidential debates.

Overall, it's clear that the majority of Americans believe climate change is real and 73 percent "somewhat strongly trust" climate scientists about global warming, so it's about time the lesser majority and Mr. President start listening to the people and facing the facts.